OMG HD Zombies are coming to the Vita

Great news! After months of hard work here at Laughing Jackal we’re ready to unveil our latest Vita project. From my recent Tweets, some of you may have already guessed, and it’s easily our most requested game from our more vocal Twitter and Facebook followers, so I’m genuinely thrilled to reveal that our new game is (drum roll please)… OMG HD Zombies! 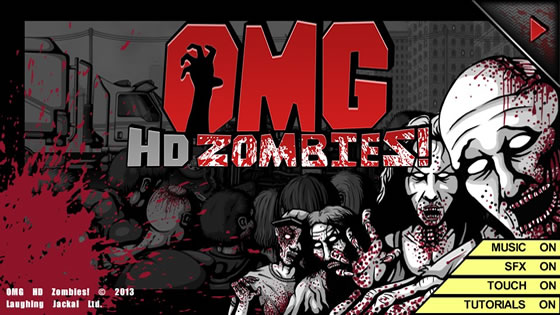 The OMG HD Zombies! title screen in all its g(l)ory.

If that name seems familiar it’s because OMG HD Zombies! is a wholly revamped full-blooded Vita homage to our Minis title, OMG-Z, which first reared its badly decomposing head in 2011 and is currently ranked in the Top 10 PSP games of all time on Metacritic. The reviewers loved it, with Eurogamer calling OMG-Z: “...a monstrously addictive quick-fire affair that utterly nails what on-the-go handheld gaming should be about.” and awarding it 9/10.

For those of you who never experienced the simple joys of zombie-horde-popping the first time, the undead infection in OMG HD Zombies! is the result of a scientific experiment on a virulent fungus that causes its zombified victims to explode when attacked. Any infected matter ingested or inhaled by a human victim causes them to become a zombie in turn.

That’s pretty cool in itself, but the best part is that if any infected matter lands on another zombie then that zombie explodes too, causing a rapid chain reaction of gory explosions and maximising the likelihood of nearby victims being infected. Wise to this knowledge, your Riot Cop character is able to take down whole city blocks of the undead with a single well-placed rifle round and a well chosen vantage point.

For example look how some heavily upgraded Civilian Zombies can be made to work for you: 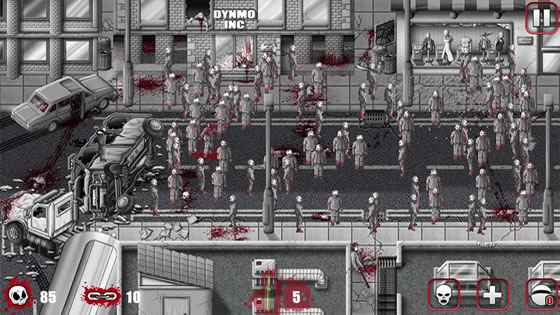 I just shot the zombie that’s beginning to split in half in the left–most part of the horde with my first bullet. 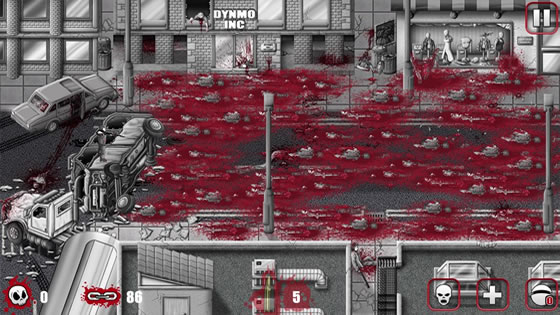 Now you can see that the whole lot of them have died in an unstoppable chain reaction of blood and gibs. Kinda like a fusion reaction, but cooler in both senses. Notice no more bullets have been used (see bottom-centre of the GUI.)

If I had to describe OMG HD Zombies! in a sentence (which I should as I’m trying to sell it to you guys) it’d be this:

“OMG HD Zombies! is kind of like the world’s most satisfying bubble wrap, where – if you pop the right one – the whole sheet bursts, one bubble after another… plus every bubble is full of zombie gibs that literally paint the town red = Win.”

Here’s a list of all the additions we’ve made to OMG HD Zombies! over and above the original game:

I’m sure you’ll agree that’s quite the feature list. We have basically given you a sequel to the original game in all but name. Everything’s either brand new or reworked from scratch to provide the ultimate zombie-slaying thinking gamer’s shooter.

We’ll be revealing more about some of those new features over the coming weeks, but for now I hope you’re as excited as we all are about OMG HD Zombies! Like I said earlier, we’ve poured everything into this and I’m sure you’ll see that when you get to play it in a few weeks’ time.

Tune in next week for another update: I guess we can introduce you to our new zombies! Until then, have a great week and spread the word:

OMG! The zombies are back and this time they’re very, very HD! O_o